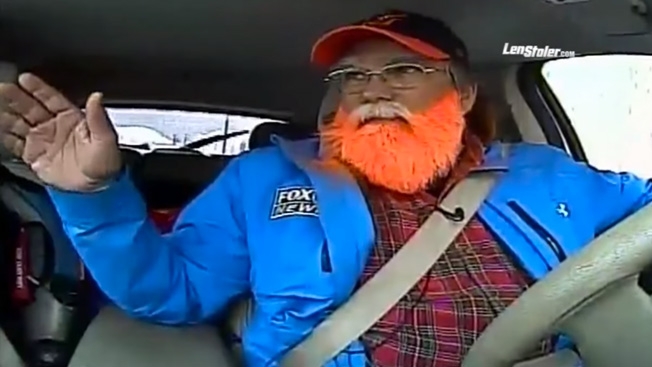 It's gotta be tough to work the traffic beat this winter on the East Coast. Well, here's a pretty hilarious video out of Baltimore, showing Fox 45's Candace Dold tossing to "Traffic Jam Jimmy"—who just happens to be in the McDonald's drive-through, trying to order a fish sandwich.

"Hey Candace, we're live? Whoops!" he says. "Hey, I've been in the car since 4 o'clock. I'm starvin'. I'm just gettin' somethin' real quick" Then a quick shout at the drive-through attendant "Hey! Is it too early to get a fish sandwich?!"

What's great about the video is that the station just runs with it, showing the orange-bearded, O's-capped Jimmy improvising the segment—and his meal, as it was still breakfast time.

Home video of the segment has been circulating around Facebook, but it seems Fox 45 is taking pride in the goof—it uploaded the segment to YouTube and has given us a perfect copy of the moment.

As we've noticed after watching several more times, there's an interestingly placed McDonald's logo or packaging in the back seat. Is Jimmy just a frequent Mickey D's patron, or is this perhaps a brilliantly disguised ad for McDonald's fish sandwich?

Take a look at the video—and Let's Go O's!

@AdFreak looks like the forecast called for McFlurries. #Snort!